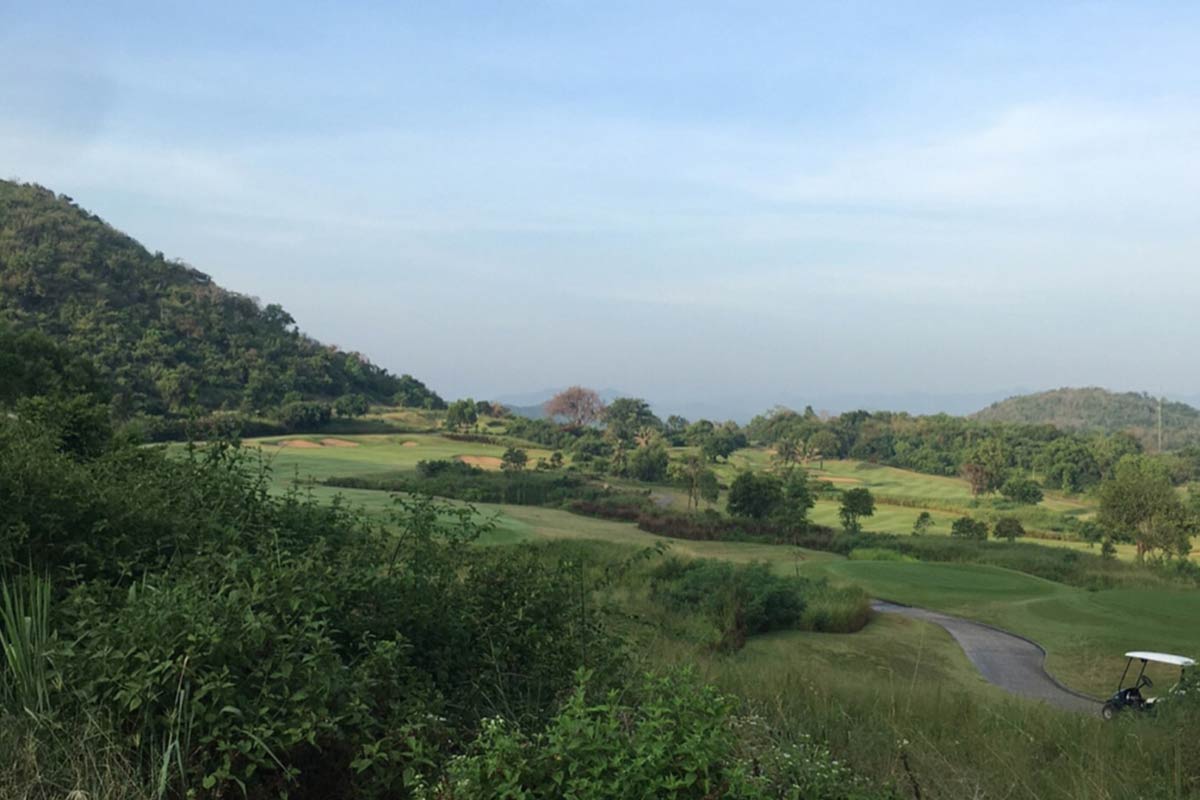 From the Middle to Far East and back again, a tale of my trip to majestic Thailand.

It all kicked off mid-April when I decided to embark on the red eye flight from London Heathrow to Abu Dhabi. Fast forward past my arrival into Abu Dhabi international, a road trip down to Ras Al Khaimah and three rounds of 69,75,70 for a tied 29th finish, I am now back in the same terminal waiting for an Etihad flight to Thailand, I am excited.

After a rather turbulent flight we finally arrive in Bangkok, and the sheer size of the city is staggering and the mayhem that ensues within it. This was to be my first experience of Asia in general, but also driving abroad, quite literally throwing myself in the metaphorical deep end. Tuk-Tuks, Street vendors, modified cars, night clubs that could only exist in Thailand, Bangkok had it all for everyone, from the culture to being the location for the second instalment of the Hangover movie, Bangkok is a place you must experience at least once.

The following day we arrive in Hua Hin, some coastal town 5 hours out of Bangkok famous for its sea-food and golf courses. Banyan golf course is our first Mena Tour location and wow what a place it is (check out my Instagram eddyhollandgolf for photos). Lush vegetation, slick greens, a Thai green curry to blow your brains out and a fantastic Villa for 5 of us, life was feeling good. That was about as good as it got in Hua Hin for me as two shocking rounds of golf lead to an easy missed cut and a following day of frustrating practice ensued, thank god that tournament was over I thought. On a side note, Hua Hins coastal town has the best seafood I have ever tried at fantastically cheap prices, and the golf courses are second to none, notably Banyan and Black mountain GC.

So, Nakhon Ratchasima, heard of it? nope? me neither all I knew was it was 6 hours north and in the middle of a jungle, most famously home to the second largest national park in Thailand- Khao Yai. Mountain Creek was our second stop, and one word would sum it up, jungle. So, a demand for accuracy and the likely death experience you could encounter if looking for a stray ball, Mountain creek was going to be exciting. I had to be confident and trust my process of which I did, for 35 holes. Having recovered from a shaky start I approach the 18th on my second round having just birdied 15,16,17, a deep breath and whack, I look up to see the good work unravelling before me, a slight pull left into the bush and a resulting double agonisingly makes me the miss the cut by 1. This is my toughest lesson in the fine margins of success and failure in professional golf so far. So, a trip literally down the beaten path from our BnB, we make the detour to as previously mentioned Khao Yai national park. We experienced truly the breath-taking wonders nature has to offer, a biblical rain and thunder storm, as well as elephants, baby monkeys clinging onto their parents, and waterfalls of which one was the scene from ‘The Beach’ starring Leonardo DiCaprio. (cue David Attenborough voice) Some places in this world really do put life into perspective and the responsibility we have to preserve and protect it. 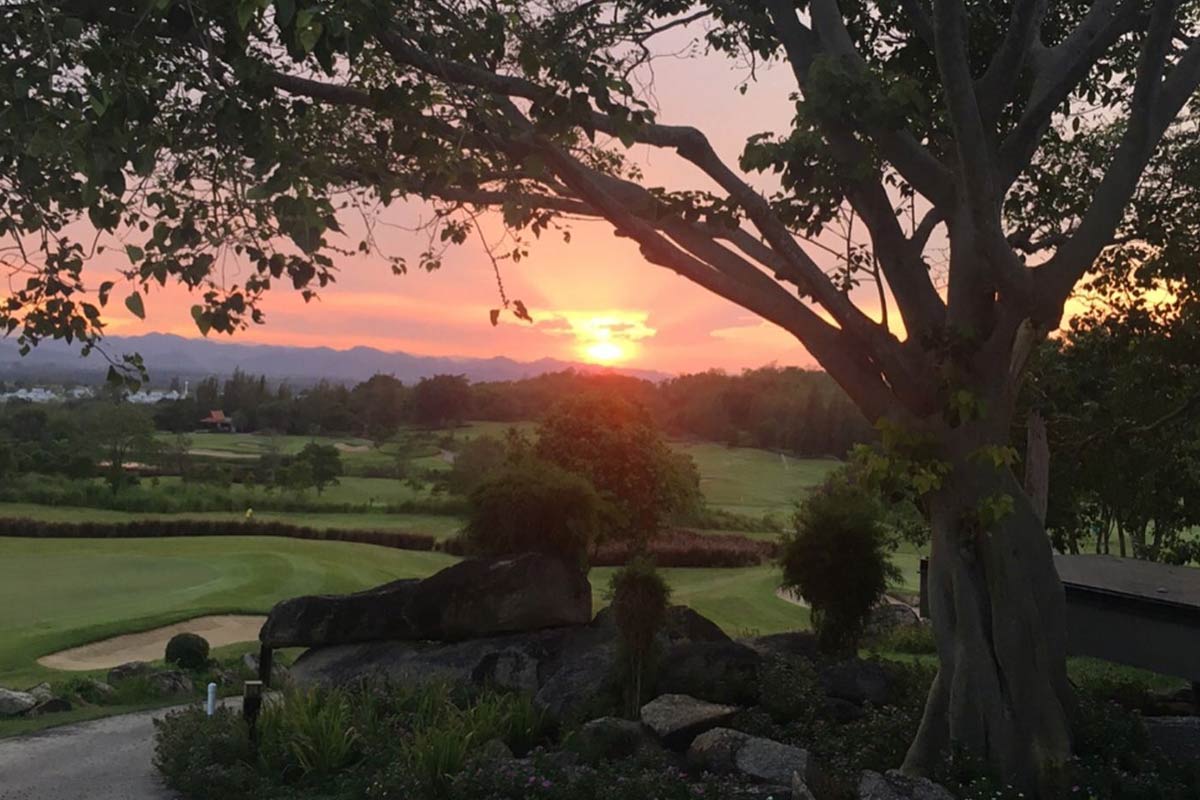 Our third and final event lay a mere 5 hours back down south at Pattana country club, just above Pattaya- figuratively named ‘the sex capital of Thailand’. The Mena Tour’s first hoorah into a 72-hole tournament and being headlined by European tour and Asian tour ace Prom Messawat. Safe to say luck was not on our side as the rainy season had arrived early and unfortunately for everyone 72 holes was now reduced to 36. Once play finally kicked off on day three the first round commenced, a solid even par round helped me to make the cut on the number, and a 36-hole final placing of tied 57th rounded off a rather frustrating trip.

My experiences of Thailand were many, and I have had time to reflect on an incredible experience that opened my eyes culturally and professionally. There are so many things to see and do there off which I have only scratched the surface of experiencing. My other highlights are Wat Pho, the Buddhist temple that accompanies the Grand palace in Bangkok. Wat Pho houses the world’s largest reclining Buddha, and is a stunning homage to Buddhism in all its splendour. The Grand Palace itself have visitor restrictions to date due to daily remembrance masses for the late, great Thai king. The Thai food, from street vendors to restaurants and its use of local spices and fresh food is truly a culinary experience, do not be afraid to try everything, the Tom Yum being my particular favourite.

Bangkok, there is something for everyone there, and that is enough said.

Just go and do as much as you can, see it to believe it and live it as you will never forget it. Thailand thank you.